Listed in order, just scroll down to find them  –  A Christmas Carol / Reasons To Be Pretty / L’Elisir d’Amore / Ten Minute Plays / The Jungle Book / The Arsonists / Bouffe! / The Thrill of Love / Richard III / The Private Ear & Black Comedy / Hamlet.

“Watch out! – it’s Scrooge”.   New Venture Theatre put on ‘A Christmas Carol’ as our December production, and it was a biggie . . .

A large cast of twenty, composed of both NVT actors and  members of our Youth Theatre (NVYT), played out Dickens’ story over thirty-five separate locations.

My lighting design had to keep pace with the action, focusing the audience’s attention on different areas of the stage in turn.

A range of atmospheres to be created, too.   There were a number of ghost scenes needing to look – ghostly, while Scrooge’s office had to evoke a distinct chill.

The domestic interiors, on the other hand, needed to be warm and inviting.

(Don’t even ASK about the low-life streets, where Scrooge’s possessions are sold off . . .)

Lighting all of this required almost all the NVT lamps – my design didn’t use quite as many as ‘L’Elisir d’Amore’ in November, but certainly more than I’ve employed on any previous New Venture production.

Mid-November, I designed the NVT lighting for ‘Reasons to be Pretty’, a play by Neil LaBute about our culture’s obsession with appearance – and also about the soul-destroying experience of shift work in places like Amazon or Wal-Mart distribution centres.

A large part of the action takes place in the staff room where the workers take their lunch break – at 3 o’clock in the morning – but there are also scenes in a restaurant lobby and on a baseball field.

Director Tim McQuillen-Wright’s set was beautifully stark and minimal, and I tried to bring out that simplicity of design in my lighting, using a different colour palette for each location.

A busy November for me.  As a British autumn closed in outside The Barn Theatre in Southwick, I worked inside the space to create an Italian village festival scene.   This was for ‘L’Elisir d’Amore’, an opera by Donizetti put on by Southwick Opera.

Director/conductor Simon Gray filled the stage with singers, and I had to produce lighting states for both midday and late into the evening and night.

Getting it right took forty-seven lamps – the most I’ve worked with.  I also made up a string of festive

lights with red, white and green bulbs – the colours of Italy.

It’s great to experIence different venues, and this was my first time working at The Barn.

Everyone made me feel very welcome. 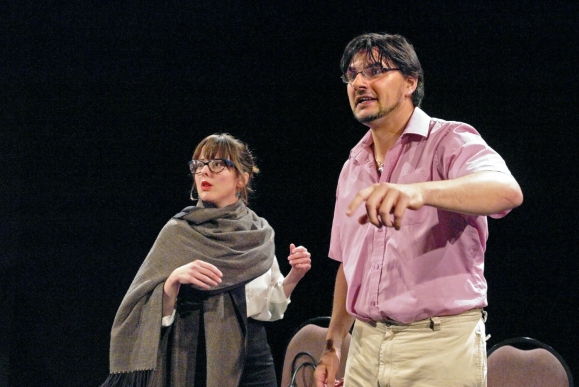 “Is that an AUDIENCE out there?”  –  Emmie Spencer and Warren Saunders have just broken through the ‘fourth wall’ in ‘Finn and Tilly’, one of the productions in NVT’s Ten Minute Play event.

New Venture put on Ten Minute Plays every couple of years – you can see some previous ones on the ‘lighting design’ page.

As always, my challenge as a lighting designer is to produce a setup that will accommodate eight different productions, lighting each one to show up the action. 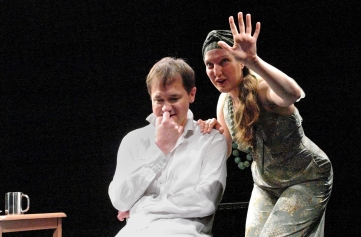 For this event, I keep the lights off the back of the stage, so that the actors appear out of black, creating a sense of infinite space behind. 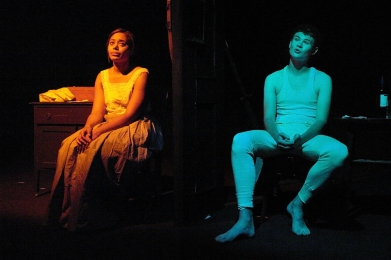 We allow each play a couple of ‘special’ lights, to cater for any specific requirements.  ‘Tainted Love’ needed their set divided into two, so I put up a pair of coloured lamps to achieve that.

With the back of the stage in complete darkness, It’s possible to use pools of light to define different areas, and to focus the audience’s attention.

A busy July for me … 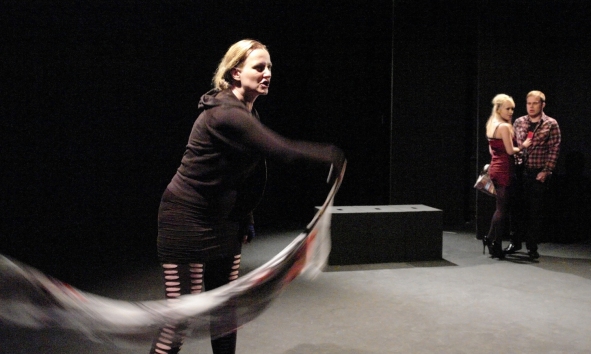 Back to Emporium at the beginning of July, to do the lighting design on ‘The Jungle Book’. Kipling’s fable is set in … a jungle, so it’s meant to be hot and steamy.

Director James Weisz’s set design called for a haze machine to give a misty tropical feel, and the hot July weather took care of the temperature, especially rigging lights high in the roof.  A great cast, including two troupes of children, and very imaginative costumes, which defined the actors’ jungle creature identities without enveloping them in animal suits.

A lot of colour too.  The action ranged between the jungle at night, the monkeys’ dark cave, and the humans’ village at sunset.

I finally got to do some lighting again,

after a lot of photography in previous months. We did ‘The Arsonists’ by Max Frisch as the June production at New Venture, and I did the lighting design. The play is about a pair of arsonists, who talk their way into staying in the attic of Herr Biedermann’s  house, which they fill with drums of petrol as part of a plan to cause a huge conflagration in the town.    It’s a parable about how we

choose not to see dangers and problems, done in the form of classical Greek Theatre, with a Chorus (of Firefighters) who comment on the unfolding tragedy.

The staging required an attic space, raised above the level of the rest of the stage which was used as both the dining room 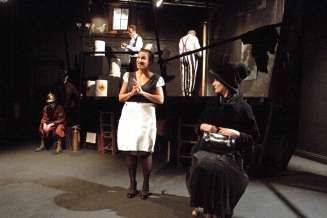 and the street outside.  The action jumped between both areas, so the lighting needed to keep each space separate and not spill over onto the other.

A very imaginative rendering of Frisch’s 1953 script, offering the audience a number of possible interpretations of the play’s meaning.

Director Sam Chittenden got powerful performances out of a cast of twelve. 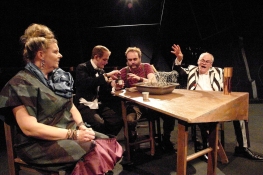 I spent most of May reviewing Brighton Fringe shows, but I also did the publicity photographs for RedBlonde’s

production of ‘Bouffe!’, an operetta celebrating the Opera Bouffe work of the great Jacques Offenbach.

They staged it at the Church of the Annunciation in Hanover, and did it as a partial promenade production,

starting in a Parisian cafe at one side of the church, then moving into the nave proper.

The staging made imaginative use of the beautiful wooden structure of the chapels at each side of the altar.

We did ‘The Thrill of Love’ at New Venture Theatre in April, and we needed press images, so we set up some ‘noir’ style lighting to produce this photograph of Emmie Spencer as Ruth Ellis, the last woman in Britain to be hanged for murder.  We used another shot as a Facebook header to advertise the show.

We also produced a rehearsed reading of ‘Richard III’, with Colin Elmer in the title role.  We did a publicity shot for this one too, but the light was casting a very odd shadow . . . 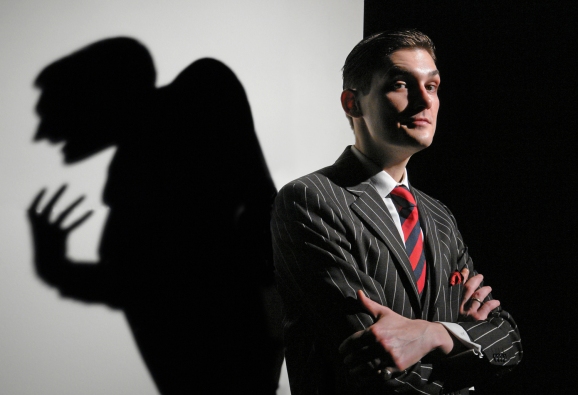 We used this photograph on the poster as well, but I managed to get blood over everything – messy!.

Co-incidentally, it went on view on the same week that Richard III was being re-buried in Leicester Cathedral.

February gave me an interesting

For ‘Black Comedy’ the basic gag is that the illumination is reversed – dark for light.

Two-timing artist Brindsley is trying to sell his sculpture, but there’s a power cut in his flat, so all the characters stumble round in complete darkness – except that we can see them ‘cos they’re lit.   Got that?

Any time someone strikes a match or puts on a torch there’s obviously a pool of light, so the stage goes dark in that area.

We had to turn different areas dark in sequence as a character moved across the stage – the lighting operator had to keep her eye on the ball . . .

And so we’re into 2015.  It’s been a year since I worked on Steven O’Shea’s production of ‘Old Times’ at New Venture Theatre (you can see that on the ‘2014 projects’ page), and this January he directed his own, shortened, adaption of ‘Hamlet’, for which I did the set and lighting design. 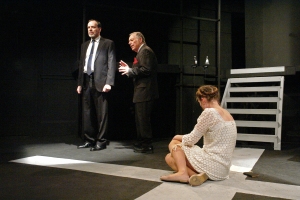 O’Shea has cut the play down to its core – no extra courtiers or unnecessary detail, just the two families at the centre of the drama – and the staging design was similarly minimal and stark.

We used raw scaffolding to build raised platforms from which characters could watch the action below, while pools of light gave the impression of light entering through a high palace ceiling.

Great ensemble playing by the NVT cast, but Johnny Parlett’s performance as Hamlet, unsure of how to deal with the appalling revelations of his father’s murder, was riveting.