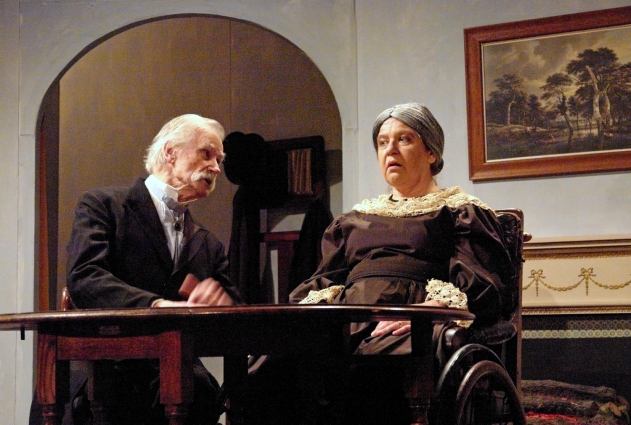 I was very pleased with the lighting on ‘Thérèse Raquin’ – some of the pictures almost look like paintings.

A lot of that is down to the skills of the set constructors and costume designers from the Wick Theatre Company, at The Barn theatre in Southwick.    Dan Dryer’s production of Zola’s gothic tale of passion, murder and  psychological obsession was set in the Raquin’s living room, above the haberdasher’s shop in nineteenth century Paris.

Most of the action takes place over a number of evenings, but there are some scenes at midnight, with the room lit only by the light from the fireplace.

Zola’s novel has been adapted into a play by Leslie Sands, and it’s this version that Dan Dryer has used.   The director got remarkable performances from his actors, really bringing the horrific tale to life.

Wow!  There’s a mechanical nightingale going through its clockwork repertoire, while next to it there’s a real nightingale, all movement and grace as she dances – displaying the joys of freedom and constantly innovative song. 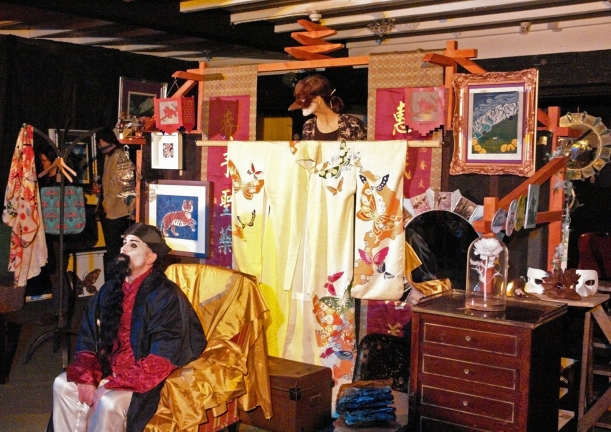 Here she is again, peering out above the Chinese Emperor, in Showshoppers’ early Christmas show ‘The Nightingale’ at The Old Ship hotel in Brighton.  There are a lot of artworks – paintings, prints, jewellery and fabrics – because the show was designed around artists’ work, which dressed the set and could be purchased by the audience after each show. 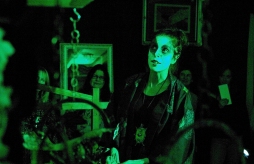 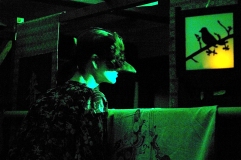 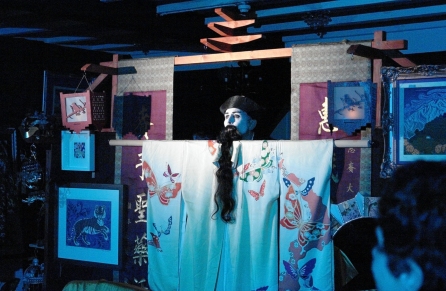 A challenging venue to light – the low ceiling meant the lights caught the promenade audience, and budget constraints meant I had only seven lanterns to play with.  With just these, I had to create a range of lighting states to illustrate each part of the story.   Great fun, though – especially the scene where the Emperor is critically ill, and Death is hovering very close . . . 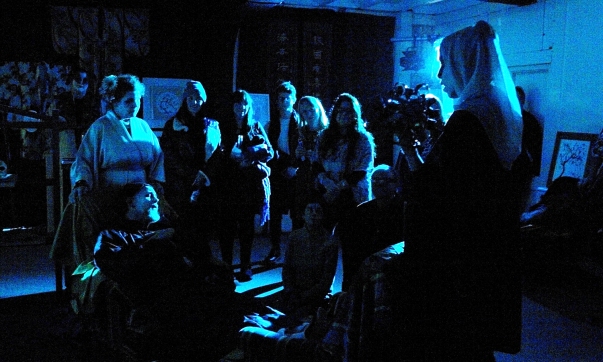 Busy month at NVT – November gave us the preparations for ‘Be My Baby’ as well as the run of ‘Orphans’.  The girls in the 1960s home for unmarried mothers were kept busy too, in the laundry, but then suddenly the production broke into dance routines, featuring pop records (by The Ronettes and others) from that amazing decade. 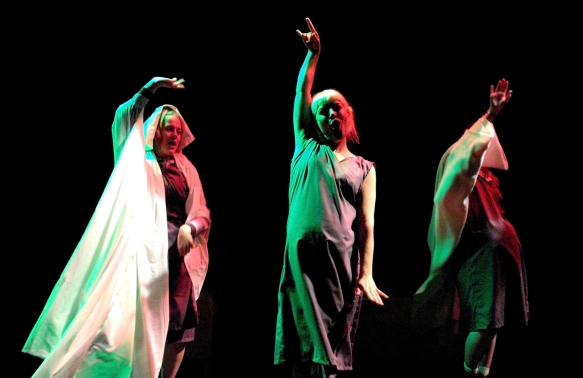 The Sixties was amazing for music, but also for the profound changes in British culture.  Mary is pregnant, and her mother can’t face the shame that will bring on the family, so she insists that her daughter go off to have her baby in secret.

Director Jerry Lyne wanted the action to move smoothly around various locations of the baby home, from the laundry to Matron’s office and the girls’ bedroom.  My lighting had to keep each area separate and clearly defined. 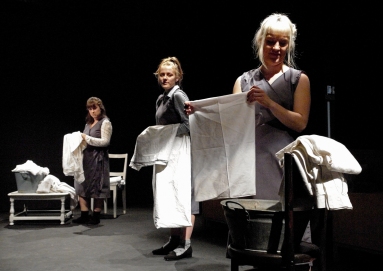 A great cast really brought Amanda Whittington’s script to life.    Funny, sad, feisty.  A poignant reminder of just how far we’ve progressed as a society since the Sixties.

So, You’re having dinner with your partner and suddenly your brother turns up, covered in blood!   What’s happened?   Whose blood is it?    That’s the opening scene of ‘Orphans’, New Venture Theatre’s November production.

The answers to whose blood it is are very dark indeed.  Tim McQuillan-Wright’s remarkable set gave an unsettling dimension to the domestic interior, and my lighting had to bring his vision to life on the NVT Studio stage.  Producing sharply defined shadows on the screen – in a very restricted space – was an interesting technical challenge.

Director Charly Sommers got powerful performances from her three actors, really bringing out the layers of evasion and passion in Dennis Kelly’s gripping script. 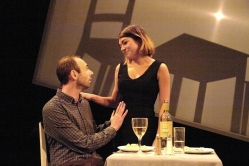 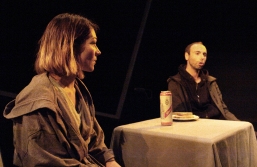 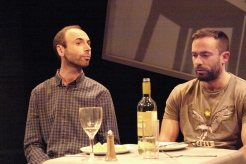 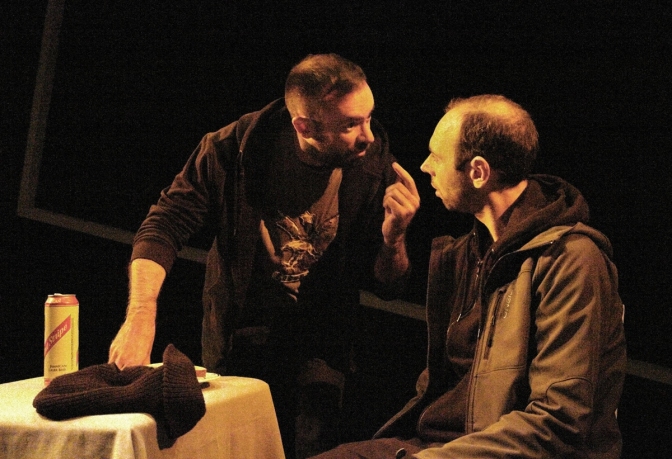 The play’s action proceeds over a long evening, and my lighting had to evoke the warm interior lighting, gradually dimming as the hours slipped by . . . 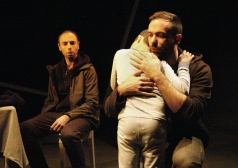 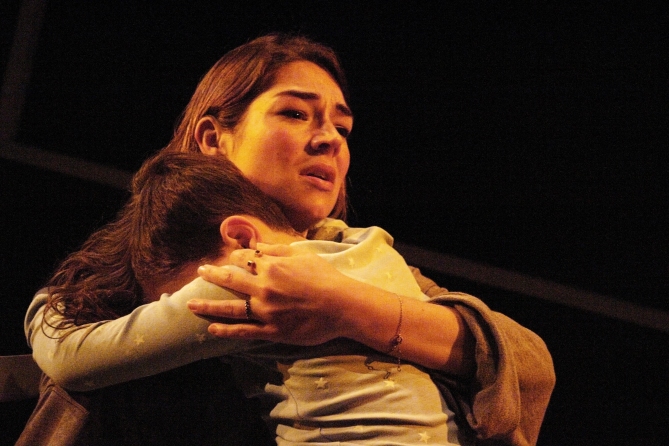 Where better to begin with ‘Jumpy’ than Frances’ burlesque dance?    NVT’s June production is about sex (appropriate and inappropriate), and the trials of parenting, and about the different perspectives of being fifty and fifteen. 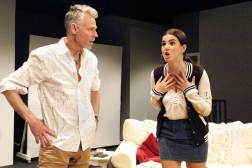 A challenging piece to stage, as the action moves between multiple locations, including a house, a flat, a country cottage and a visit to the beach.   No pressure there, then …

My lighting design had to focus attention on different areas in turn, keeping the remainder of the stage as unobtrusive as possible.   I had to make the illumination harsher or softer, too, as the setting required. 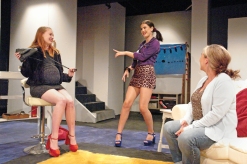 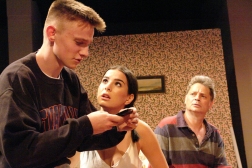 There’s even a bedroom scene

All the scene changes were carried out by stage crew in almost total darkness, swinging the sofa round to become an integral part of each location.   Director Diane Robinson got some great performances from a very talented cast. 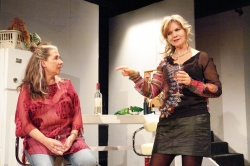 The ‘Two Minute Hate’ from 1984.    Genuinely frightening to watch the wave of emotion as the workers at the Ministry of Truth vent their rage at Emmanuel Goldstein – his image is on the video screen, and presumably behind the audience too.    I designed the lighting on New Venture’s May production, our offering as part of Brighton Fringe.

For the set, director Nick Richards and designer Simon Glazier produced a very flexible construction of large panels which could be pivoted into different arrangements, allowing cast members themselves to move the action smoothly from location to location. 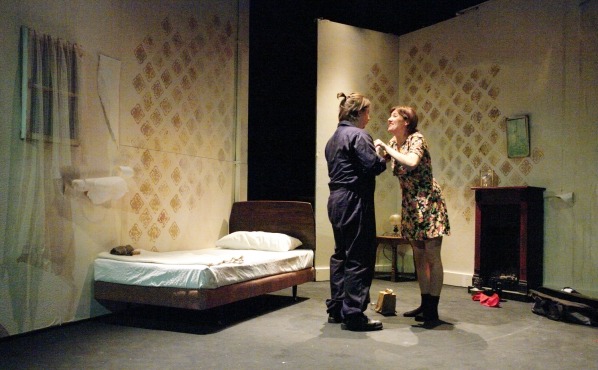 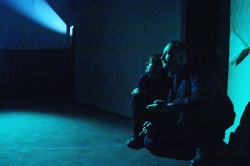 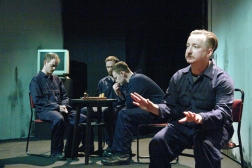 We used the NVT Upstairs Theatre  for the

first half of this production, then after the interval the audience was led into the downstairs Studio, a brightly lit space which was the interrogation cell in the Ministry of Love.   Lighting two locations for a single show took almost all of our lighting stock – luckily we’ve recently increased the number of lamps we possess.

The action takes place in a New York apartment – “You can see the Hudson from the bathroom!” – after the funeral of a Jewish patriarch.   As in so many families, there’s a fight over who will inherit an important family heirloom.   And Daphna’s nothing if not a fighter …

The Upstairs theatre at NVT is a very wide space, and it needed a lot of lanterns to create an even illumination.   Worth it, though – to light great performances from director Bob Ryder’s hugely talented cast.

February.     In Sebastian Barry’s play ‘Our Lady of Sligo’, Mai O’Hara lies dying of liver cancer in a Dublin hospital, but in her mind she ranges back over her life – the tribulations of being an alcoholic married to Jack and the idealised memories of her beloved Dada. 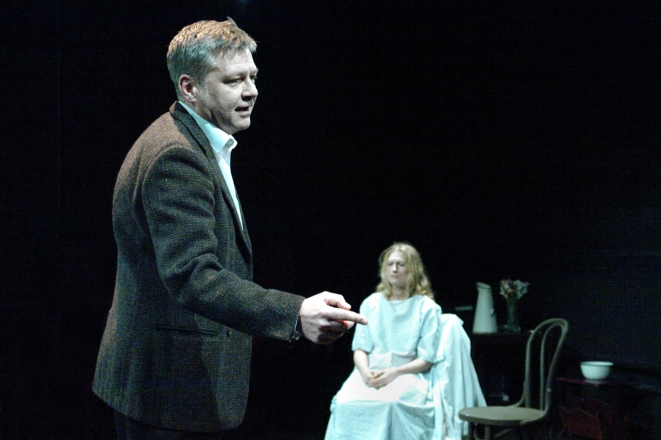 Like in ‘Iron’, which you can see on the Set Design page, the set for this production was achieved almost entirely with lighting.   Just Mai’s bed – a chair draped in sheets – and a couple of extra seats (one for the nursing Sister)) were all the cues the audience was given. 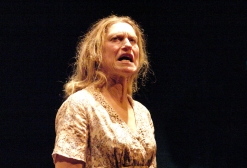 I designed the lighting so that the action could switch between the cold light of the hospital reality, where Mai’s husband and daughter are visiting, and the warm tones of Mai’s interior memories, where she interacts with people from her past.

Director Mark Wilson wanted to do this production in the round, with audience on all four sides of New Venture’s Studio space.  Hard for the actors, who need to keep changing their direction – and for me, as I had to light them while avoiding dazzling the audience. 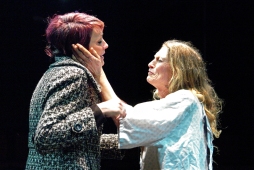 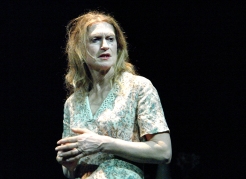 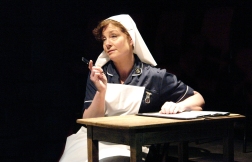 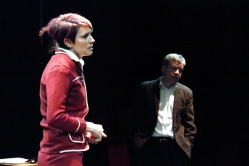 NVT’s January production was ‘True West’, by Sam Shepard.   Sibling rivalry, Hollywood ethics, the myth of the Old West – and a LOT of booze.   Austin and Lee end up trashing their mother’s house over a couple of days.

The action takes place at night, as well as in the early morning and the late afternoon, so I had to produce three separate lighting states.  I’ve never had to rig so many lights behind the set before! 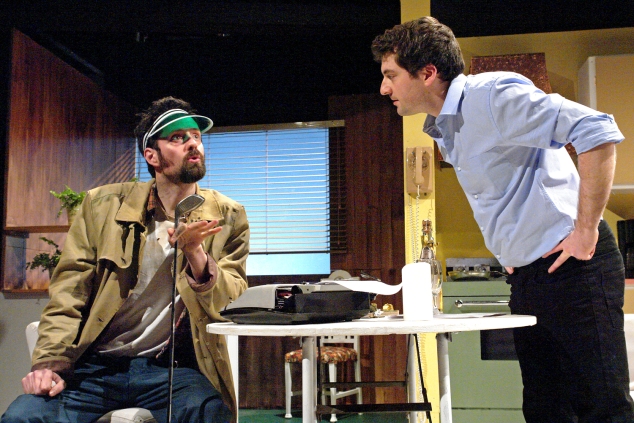 Great performances from Steven O’Shea’s cast.  Manic action in the second half, made very believable by Simon Glazier’s highly realistic set.   You can see more of his work (and mine too, of course) in ‘The Homecoming’ back on the 2017 projects page.    I also did the poster for the production, you can see that on the ‘Theatre Posters’ page. 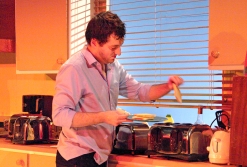